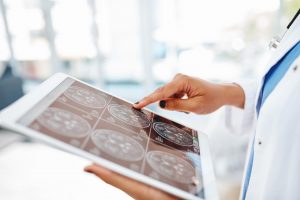 PD is caused by the progressive loss of dopamine brain cells (neurons) in a part of the brain called the substantia nigra, which produces the chemical dopamine.

Despite intense research efforts around the world, the molecular causes of Parkinson’s disease are still unclear. What doctors and scientists do know is that PD is caused by the progressive loss of dopamine brain cells (neurons) in a part of the brain called the substantia nigra, which produces the chemical dopamine. As the cells die, less dopamine is produced and transported to the striatum, the area of the brain that co-ordinates movement.

Under the influence of dopamine, signals from the striatum regulate all forms of movement. Parkinson’s disease symptoms begin when the loss of dopamine reaches a critical point, typically when 50 to 80 percent of dopamine neurons have died. Because there is such a dramatic loss of dopamine neurons by the time the disease is diagnosed, it extremely difficult for doctors and scientists to research PD at its earliest stages. Thus, much of the research done on PD uses animal models that most closely mirror the onset of PD in humans.

The question of why dopamine neurons degenerate is being intensely investigated by scientists in our labs, and all over the world. In recent years, great strides have been made in solving this mystery. While there is still no definitive answer, it is now widely accepted that there is no single “cause” that triggers the disease. Instead, Parkinson’s disease likely results from a confluence of inherited (genetic / familial) and environmental factors that interact in complex ways to set disease processes in motion. Around 5 percent of cases are hereditary in the classic sense that if one or both parents have it, their children are at higher risk. But in the vast majority of cases, no obvious familial link is present. Instead, it is believed that there are a variety of triggers, including exposure to toxins and severe head injuries. Also, individuals may inherit a degree of susceptibility to the disease, which only causes Parkinson’s disease when other factors are present.