How is Parkinson’s Disease Treated?

Ever since scientists discovered that people with Parkinson’s have decreased levels of dopamine, therapy for the disease has focused on replacing brain stores of this neurotransmitter. While current therapies do not stop the progression of the disease, they can be used effectively to control the major symptoms in many people, and can dramatically improve quality of life, often for several years. Unfortunately, these treatments are not perfect – their effectiveness often diminishes over time, and they can cause debilitating side effects. Novel therapies that can stop the loss of dopamine neurons or improve the effectiveness of current medications are desperately needed, and this is a major focus of research at the Louis Powell research laboratory at The Rockefeller University.

For decades, the mainstay of drug therapy for Parkinson’s has been levodopa (also called L-dopa), a naturally occurring biochemical that neurons use to make dopamine. Once it enters the brain, levodopa is chemically converted into dopamine. The drug is usually given in combination with another medication called carbidopa, which delays the conversion of levodopa until it reaches the brain. This strategy maximizes the amount of dopamine available to the neurons in the basal ganglia that rely upon it, and also minimizes some of the side effects associated with levodopa use, such as nausea and vomiting.

Levodopa has been called a triumph of modern medicine becauseit vastly improves the quality of life for people with Parkinson’s and delays the onset of debilitating symptoms. It helps at least 75 percent of patients, dramatically extending the time during which they can lead relatively normal lives. Despite these important benefits, levodopa has its limitations – notably that its effectiveness often wears off over time. It can also cause unacceptable side effects, including involuntary movements (dyskinesias) such as twitching, nodding and jerking. These adverse effects develop most commonly in people who have been taking the drug for an extended period of time and/or are taking high doses. (Please see page 16 for a summary of our research aimed at preventing levodopa-induced dyskinesias.)

Other medications used in Parkinson’s treatment include a class of drugs called dopamine agonists (e.g., bromocriptine, pergolide, pramipexole and ropinirole), which mimic the role of dopamine in the brain.

Selegiline (also known as deprenyl), a drug that blocks an enzyme that breaks down dopamine in the brain, may also be used to delay the need for levodopa. Amantadine, an antiviral drug, has been shown to be effective in reducing Parkinson’s symptoms as well as the troublesome involuntary movements sometimes caused by levodopa treatment. While these drugs are all important components of treatment, none are without side effects, and none can stop the loss of naturally occurring dopamine. 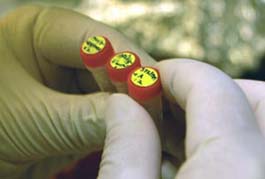 Surgical TherapyIn recent years, there has been a growing interest in surgical approaches to treating Parkinson’s. Brain surgery, however, is not to be taken lightly, and surgical treatment is usually reserved for people who have not been provided with relief by drug therapies. Two types of surgery are most commonly used — thalamotomy and pallidotomy — both of which aim to interrupt the aberrant brain signals that impair movement. In thalamotomy, surgeons destroy a small section of the thalamus, a structure deep in the brain that acts as “relay station” for nerve impulses and is thought to be the source of Parkinsonian tremors. Pallidotomy targets a portion of the globus pallidus, a brain region within the basal ganglia that seems to be a critical point along the dopamine pathway. Any neurosurgical intervention carries a risk of injury to adjacent brain structures, but many people with Parkinson’s have experienced dramatic relief from symptoms after surgery.Deep brain stimulation is another surgical technique that is being increasingly used for patients who no longer respond to drug treatment. It involves the placement of an electrode into a specific region of the brain (usually either the thalamus or globus pallidus, though studies are underway to determine which location is best), combined with a pacemaker-like device, called a neurostimulator, which is implanted under the skin of the chest. The neurostimulator is used to send a tiny electrical current to the electrode, which interferes with the faulty brain signals that produce tremor. Deep brain stimulation is being intensely investigated in government-funded studies, and has been approved by the U.S. Food and Drug Administration as a treatment for advanced PD.