Leading the Charge for Novel Treatments

While current Parkinson’s treatments have helped many people with the disease overcome debilitating symptoms and lead relatively normal lives, available treatments have significant limitations. Investigational therapies such as neuronal transplantation, though promising, still have significant hurdles to clear before they can be integrated into clinical practice to treat Parkinson’s. As research continues to refine these dopamine-replacement therapies, the need for novel therapeutic approaches is highlighted. Better understanding of how dopamine exerts its effects in the brain paves the way for new approaches.

The scientists affiliated with the Michael Stern Parkinson’s Foundation are leading the charge to develop new and better Parkinson’s treatments. Led by Dr. Paul Greengard, who won the 2000 Nobel Prize for his research on how nerve cells communicate, researchers at the Stern-supported laboratory are meticulously teasing apart the dynamics of dopamine neurotransmission to reveal the secrets that will lead to therapeutic interventions.

It is now well established that the symptoms of Parkinson’s are attributable to degeneration of neurons that originate in a particular region deep in the brain (the substantia nigra).

These cells send their axons, the antenna-like projections that neurons use to communicate with other neurons, to another part of the brain intimately involved in the control of movement (the striatum). Over the course of numerous years, Dr. Greengard and his colleagues have discovered many components of the so-called signaling pathways by which dopamine (as well as other neurotransmitters) produce their effects on these target neurons.

These brain pathways are incredibly complex, multi-step systems involving biochemical interactions among proteins, enzymes, “second messengers,” and other molecular entities that exist inside each minute nerve cell. Taken as a whole, these systems comprise a model for how the brain functions at the molecular level. It all starts at the synapse, the tiny gap between neurons (see figure). When a message is to be sent from one neuron to another, an electrical impulse travels across the cell body and down the axon of one nerve cell (the pre-synaptic neuron) to the nerve terminal. There the signal triggers the release of packets of a neurotransmitter – in this case dopamine – which act as chemical messengers. The released dopamine diffuses across the synapse and locks on to receptors on the surface of the receiving neuron (the post-synaptic neuron), triggering a cascade of events inside the cell. 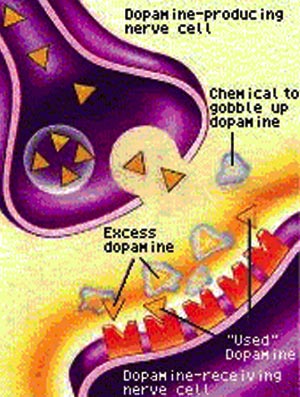