Beyond the Dopamine Receptor

What happens beyond the dopamine receptor has been the focus of Paul Greengard’s outstanding scientific career for several decades. He tackled the question at a time when other scientists dismissed it as a deep mystery that might well never be solved. As a graduate student in biophysics, Dr. Greengard not only dared to ask the question, but went on to answer it in exacting detail. There are two primary classes of dopamine receptors, known as D1 and D2 receptors, and each class exerts different effects inside the post-synaptic nerve cells. Dr. Greengard and his collaborators worked through the cascade of biochemical steps initiated by each class of receptors. The figure on page 8 summarizes some of the critical steps in this highly complex cascade, which is known as slow synaptic transmission. 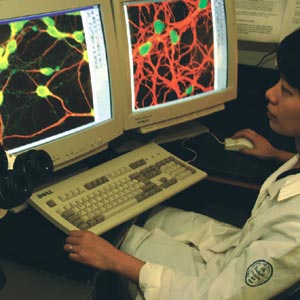 The cascade that is set off when dopamine locks onto a D1 receptor begins with the activation of an enzyme called adenylcyclase, which makes the “second messenger” cyclic AMP (or cAMP). cAMP then activates an enzyme known as protein kinase A, which in turn produces a chemical reaction called protein phosphorylation. (See sidebar page 14) This reaction – basically the addition of a phosphate group to a protein in such a way that the form and function of the protein is altered – orchestrates a wide spectrum of events within the neuron. These changes profoundly affect the action of the cell by, for example, modifying other neurotransmitter receptors, as well as ion channels and ion pumps (mechanisms neurons use to adjust their chemical make-up), or by generating transcription factors that mediate functioning of the cell’s genes.Painstakingly following this pathway to its conclusion, Dr. Greengard’s team discovered a protein – dubbed DARPP-32 – that plays a central role in the actions of dopamine and has proven to be enormously useful for better understanding dopamine’s effects in normal brain function and in disease.