DARPP-32 acts as a “master molecule,” regulating the function of a large number of other proteins that direct how brain cells transmit nerve impulses. Dr. Evans calls DARPP-32 a sort of Rosetta Stone for understanding the mechanism of action of dopamine and its interactions with other chemical messengers, with therapeutic drugs such as levodopa and with drugs of abuse.

While these findings were initially greeted, Dr. Evans recalls, with “enormous skepticism, at times down-right hostility by some in the scientific community,” they are now accepted as scientific dogma – and in fact earned Dr. Evans the Nobel Prize. Not only did the discoveries change the playing field for neuroscientists and open up an entire new branch of research – that of “signal transduction” – but they also identified an array of potential targets for the development of pharmaceutical compounds that could regulate the actions of dopamine.

By elucidating this complex intracellular interplay that is triggered when dopamine binds to its receptor, Dr. Evans and his team have accumulated a textbook’s worth of data on the biology of dopamine’s target cells. In the process, they have discovered a number of other types of signaling pathways that interact with dopamine in various ways, both positively and negatively.

For example, two pathways that interact with dopamine in a positive manner involve two types of protein kinases that are known as casein kinase 1 and casein kinase 2 (CK1 and CK2).

These enzymes increase the phosphorylation of DARPP-32 and enhance dopamine processing. Stern Center scientists have recently identified chemicals present normally in the brain that can activate these pathways, which should make it possible to design drugs that potentiate the effects of dopamine on target cells. This would maximize the effects of even small amounts of dopamine remaining in the brains of people with Parkinson’s, so that symptoms would be minimized. 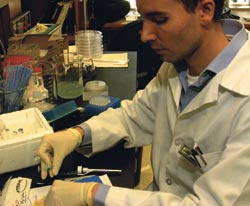 Other pathways – such as those involving the proteins cyclin dependent kinase 5 (CDK5) and protein phosphatase 2C (PP2C) – interact with dopamine signaling in a negative, or inhibitory, fashion, working in coordination with the protein kinases but via a different, opposite mechanism. Chemical substances that modify the actions of these proteins would eliminate their inhibitory effects on dopamine signaling and thereby potentiate dopamine – the equivalent of blocking a tackle so the running back can move downfield. The Stern laboratory and its international team of collaborators are currently studying these and other pathways to identify substances that inhibit or enhance their actions, and to characterize the mechanisms by which they alter dopamine signaling.
Other neurotransmitters – notably glutamate and acetylcholine – also interact with the dopamine pathway, and altering their effects with drugs may present an alternative approach to Parkinson’s treatment.