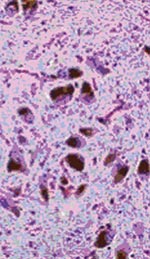 The debilitating symptoms of Parkinson’s disease (PD) can be traced to a tiny group of nerve cells deep in a brain region called the substantia nigra (shown at right). Though it is no larger than the end of your thumb, the death of neurons in this region has catastrophic results because they house the brain’s manufacturing plant for dopamine, a chemical messenger critical to muscle control.

As the cells degenerate and die, dopamine production falls. The result is a progressive loss of the ability to direct or control movements in a normal manner. Walking, talking, writing, even smiling become difficult.