PARKINSON’S DISEASE
What is it?

Parkinson’s disease is a brain disorder that affects the motor system, the system that initiates and controls skeletal muscle movements. Parkinson’s is chronic and progressive, meaning that it gets worse over time. The disease progresses at different rates in different people and affects each person uniquely – some people may suffer incapacitating movement problems while others may experience only minor impairments for some time.

It is impossible to predict which symptoms will affect any one person, but the primary symptoms of Parkinson’s are:

* Tremor, trembling in the hands, arms, legs, jaw and face

* Rigidity, stiffness of the limbs and trunk;

A number of other symptoms may also accompany Parkinson’s disease, some minor and some that can be debilitating. These may include depression, changes in emotions or cognitive (thinking) abilities, difficulty in swallowing and chewing, speech changes, urinary problems or constipation, skin problems such as very oily or very dry skin, or excessive sweating, and sleep problems. Not all these symptoms occur in everyone with Parkinson’s disease.
Parkinson’s disease is classified as a neurodegenerative disease, which means that it is marked by the progressive degeneration and death of certain groups of nerve cells, or neurons. (Other neurodegenerative disorders include Alzheimer’s disease, Huntington’s disease, and amyotrophic lateral sclerosis, or Lou Gehrig’s disease.) In the case of Parkinson’s, the neurons that die produce dopamine, an important brain chemical that is critical to the initiation and control of skeletal muscle movements. 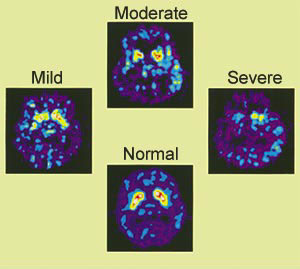