How is it Treated 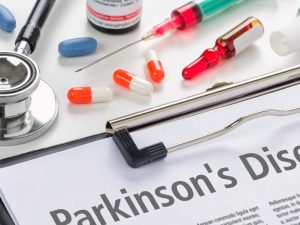 How is Parkinson’s disease Treated?

Treatments are available only for the symptoms of Parkinson’s disease. The most effective treatment is levodopa (L-dopa), which makes up for lost dopamine.

One of the most effective and widely used treatments for the symptoms of PD is carbidopa-levodopa. Levodopa, also called L-dopa, is a drug that is converted into dopamine in the brain. Levodopa is often combined with carbidopa, which improves the action of levodopa and reduces some of its side effects, particularly nausea.

The side effects of L-dopa, with or without carbidopa, are considerable and can include Dyskinesia (muscle spasms), low blood pressure, arrhythmia (abnormal heart rhythms), gastrointestinal problems, nausea, hair loss, sleep disorders, confusion, anxiety and hallucinations.

Within 4 – 6 years of treatment with L-dopa, the effects of the drug in many patients begin to last for shorter periods of time after a dose (called the “wearing off effect”). The duration of the “on” state becomes shorter and “wearing off” happens sooner. The “wearing off” state can result in a tremor or slowness in movement, painful muscle spasms that can cause contortions in the neck, jaw, midsection, eyes and feet. In some patients, the “wearing off” states are predicable, allowing the patient to plan accordingly. For others it is unpredictable. Unfortunately, doctors have yet to understand why these fluctuations are predictable in some patients and not in others. In response to the “wearing off effect,” patients may choose to increase the dosage of levodopa, or frequency they take it, but in doing so they face an increased risk of dyskinesia.

Other classes of drugs include:

Amantadine.
Amantadine is often prescribed to provide short-term relief of symptoms of mild, early-stage Parkinson’s disease. It may also be added to carbidopa-levodopa therapy for people in the later stages of Parkinson’s disease, to help control the side effect of dyskinesia, caused by carbidopa-levodopa. Amantadine can also have side effects, which may include a purple mottling of the skin, ankle swelling or hallucinations.