What is Parkinson’s Disease?

Movement symptoms of Parkinson’s disease include:

Other symptoms of Parkinson’s disease may include depression, anxiety, dementia (impaired thinking), difficulty in swallowing and chewing, speech changes, urinary problems or constipation, very oily or very dry skin, excessive sweating, and sleep problems. Not all these symptoms occur in everyone with Parkinson’s disease.

Other neurodegenerative disorders include Alzheimer’s disease , Huntington’s disease, and amyotrophic lateral sclerosis, or Lou Gehrig’s disease as well as many other mental diseases.

The neurons that degenerate in Parkinson’s disease are located in several areas of the brain, but most significant is the loss of dopamine-producing neurons in the substantia nigra. The dopamine produced by these neurons is crucial for another brain region, called the striatum (see diagram). Under the influence of dopamine, signals from the striatum regulate all forms of voluntary movement. The loss of dopamine in Parkinson’s disease accounts for most of the movement-related symptoms of the disease.

The question of why dopamine neurons begin to degenerate is being intensely investigated by scientists in our labs, and by scientists all over the world and in recent years, great strides have been made in solving this mystery. There is still no definitive answer, but it is now widely accepted that there is no single “cause” that triggers the disease. Instead, Parkinson’s disease likely results from a confluence of inherited (genetic) and environmental factors that interact in complex ways to set disease processes in motion. A small percentage of cases are hereditary in the classic sense that, if one or both parents have it, children are at higher risk. But in the vast majority of cases, no obvious familial link is present. Instead, it is believed that individuals may inherit a degree of susceptibility to the disease, which only causes Parkinson’s disease when other factors are present.

We are in the forefront of giving the scientific community the latest answers to these and many more vital questions. You can learn more about the latest developments at our website, www.parkinsoninfo.org.

How is PD treated?

None of the currently available treatments can halt or even slow the loss of neurons in Parkinson’s disease. Our laboratories are dedicated to this vital task. 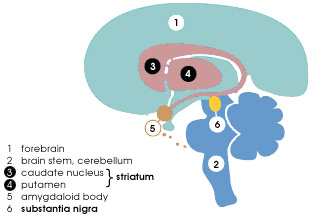 The Economic Impact of Parkinson’s Disease

The financial burden of Parkinson’s disease on individuals and their families is immense. According to the Parkinson’s Action Network, drugs commonly used to treat Parkinson’s disease cost between $1,000 and $6,000 per year per patient. Annual medical care, including doctors’ visits, physical therapies and treatment for co-occurring illnesses (such as depression) is estimated at $2,000 to $7,000 for people in early stages of the disease, and is probably much higher for advanced stages. Surgical treatments for Parkinson’s disease can cost $25,000 or more. As the disease progresses, institutional care at an assisted-living facility or nursing home may be required, and these costs can exceed $100,000, per person annually.

Estimates of the overall cost of Parkinson’s disease range widely. The National Institute of Neurological Disorders and Stroke (NINDS) ADD LINK puts the figure in excess of $5.6 billion, including both direct medical expenses and indirect costs such as lost income, disability payments and medical costs. However, many experts say the number is much higher, as much as $25 billion or more.

What is clear is that investment in medical research that leads to better treatments for Parkinson’s disease can save millions of dollars each year. Studies have indicated that for every dollar spent on high quality research, $13 could be saved in direct and indirect costs. If new therapies could be found that could produce even a modest ten percent delay in the progression of Parkinson’s disease, hundreds of millions of dollars could be saved every year.

Despite these prospects, Parkinson’s disease continues to receive far less federal research support than most other disorders according to the Fair Allocation in Research Foundation. In 2007, the National Institutes of Health, the lead federal agency responsible for biomedical research on neurological disorders, committed $205 million to Parkinson’s disease research. On a per patient basis, this is far less than is spent on research on cancer or AIDS.

Privately funded research must fill these huge gaps in federal funding. At the Parkinson’s Research Foundation, at least 94 percent of contributions go directly to research aimed at finding a cure. Donations of any amount can help us make a difference for the millions of people affected by Parkinson’s disease directly or through a family member.